Zimbabweans are at the poll today for the first presidential election in which alleged vote rigging is feared to take place. In this election the Zanu-PF party under President Emmerson Mnangagwa and Movement of Democratic Change (MDC) leader Nelson Chamisa will go head to head as the main contenders. This is the first election in Zimbabwe’s post-independence history where neither former president Robert Mugabe nor his former rival the late Morgan Tsvangirai will be contesting. But now the MDC and voters at grassroots level have alleged fears of vote rigging and intimidation by Zanu PF thugs is rampant.

There has been expressed fears that the violence displayed by the Zanu PF youth league, the Zanu PF Veterans League among others in the security forces will be repeated as seen in previous elections. Mnangagwa who became interim president after military “takeover” at his instigation saw Mugabe’s removal from power is contesting this election on the promise that he can turn the country’s economy around, while Chamisa is a young new comer promising political change. 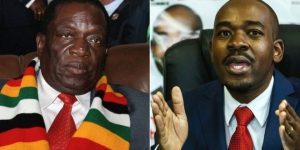 Last month, a high court ordered Zanu-PF not to force schoolchildren and teachers to attend its rallies and to wear its regalia. The case was brought by the Association of Rural Teacher Unions of Zimbabwe, which said it had acted to uphold the rule of law. The BBC’s Shingai Nyoka reports from the capital, Harare, that the head of one village told her that he had been warned that the violence of previous elections would be repeated if he voted for the opposition. However, it is unclear how widespread voter intimidation is, she adds. Most voters live in rural areas, where traditional rulers wield enormous influence. Zanu-PF has not yet commented on the UN’S statement.

The fact that Zanu-PF has been forcing school children and teachers to attend their rallies shows that little has changed about their act since Mugabe was made to resign. The Association of Rural Teachers Unions of Zimbabwe (ARTUZ), was right to bring this before the High Court as it sends us a warning about what Mnangagwa known as the “Crocodile” for his shrewd politics intends for the country’s new era. The president is a man known for putting his political agenda above the national interest (at least this is well known among political analysts). These elections should be closely watched as we wonder whether Zimbabwe will swiftly return to being an international pariah under Mnangagwa. The threat of election violence will indicate that.

The influence of traditional leaders in how their people or tribes vote in the rural areas is another cause for concern. Hopefully this attitude will change with the younger generations if the proper education and media technology was introduced. Whether you like it or not television is the biggest influencer on the dynamics of social thinking.

As Zimbabwe’s harmonised elections draw nearer, concerns by Nelson Chamisa’s opposition MDC Alliance about the voter’s roll and printing of the ballot papers have been shut down. Zimbabwe electoral Commission (ZEC) chairperson Justice Priscilla Chigumba has advised parties to lodge their complaints after the elections. Last week, Chamisa held a press conference at the party’s headquarters in Harare where he reiterated that the electoral commission could no longer to be trusted with running the elections, proposing instead that the African Union and the SADC should intervene to ensure a level playing field.

The shutting down of Chamisa’s complaints doesn’t bode well for the transparency of this election or the accountability of electoral officials. Given to the fact that similar management ha followed elections in other African countries such as Kenya, it remains to be seen whether the much-feared nation-wide post-election violence will continue there as in those other countries. Chamisa himself is a brilliant and humorful speaker who not only draws large crowds but his campaign rallies are known for the laughter that erupts from them. His calls for the AU and Southern African regional body’s intervention should be addressed.

Zimbabwe is at a crucial crossroads, soon they will have a new president, a new official face which has not been the case for 37 years.