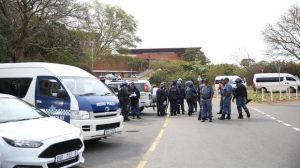 Durban – Protesting students from the University of KwaZulu-Natal’s Westville campus could be heading for another showdown with campus security and police on Monday as they have vowed not to go back to lectures until their demands for “decent” accommodation have been addressed.

However, university management said they expected the academic programme to resume as normal.

On Friday the university had to contend with another violent strike as students barricaded roads, damaged property and disrupted lectures.

The protests, which started about a week ago, are over the poor conditions of residences including on-campus accommodation, internet connectivity, matters of academic exclusion, the shuttle services timetable, and problems with the National Student Financial Aid Scheme. The academic programme was suspended for most of last week.

Students yesterday said the protest resumed on Friday after a meeting that had allegedly been scheduled between the Department of Student Residence Affairs and the house chairs of the different residences fell through.

During Friday’s protest students damaged university furniture, doors and also set alight two guard houses. The police had to use tear gas and water cannons to disperse the students.

Students speaking on condition of anonymity said they felt university management was not taking their concerns seriously.

“On Thursday there was a meeting with the Department of Student Residence Affairs where it was agreed that the house chairs of each residence would draft a report detailing all the challenges in each residence and would submit that report on Friday.

“That report would serve as a guide when the university was attending to such residences, for instance the problems that could be fixed immediately, would be fixed,” said a student.

“On Friday morning when we went for a follow-up meeting to submit the document, we found that the Department of Student Residence Affairs, which had been leading the meeting on Thursday, was closed and that is what angered the students and the protests heated up,” she said. Normah Zondo, the acting executive director of the Corporate Relations Division at UKZN, said the university was continuing to engage with student leadership in an effort to resolve the matters that had been raised by students.

She said that during the protest on Friday, the police arrested one person who was not a student.

This person had also been charged during a previous protest.

She said the academic programme would resume on Monday.

Police spokesperson Captain Nqobile Gwala said a total of 12 students had been arrested for public violence.

They were expected to appear in the Pinetown Magistrate’s Court this week.

Attempts to speak to the SRC leaders at UKZN were unsuccessful.