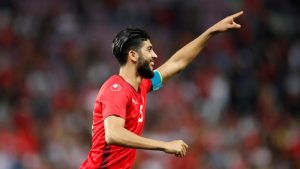 In both of their games this week, Tunisian goalkeeper Mouez Hassen went down early in the second half complaining of an “injury” as medical staff rushed onto the pitch.

During their first match against Portugal and while 2-1 down, Hassen appeared to injure himself in the 58th minute, a move which allowed his teammates to run over to the sidelines and break their fast with a meal referred to as the Iftar.

After drinking some water and eating a few dates, the North African nation bagged an equaliser six minutes later and went on to hold the European champions for the next 30 minutes to a 2-2 draw.

And in the 49th minute of a game against Turkey on Saturday, Hassen lay flat on his back while several Tunisian players ran over to the touchlines to grab some food – their first source of nourishment in hours.

The Eagles of Carthage would also draw that game 2-2.

Hundreds of millions of Muslims from around the world fast every day during the Muslim month of Ramadan.

It is a month of self-discipline where Muslims refrain from eating, drinking, smoking and having sex from sunrise to sunset.

Tunisia, however, won’t have to carry the ploy into the World Cup as the holy month ends before their first game against England on June 18.

Unbeaten during their qualifying campaign, Tunisia are making their return to the World Cup for the first time in 12 years.