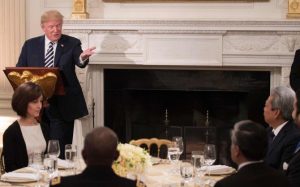 WASHINGTON, DC: US President Donald Trump welcomed Arab ambassadors on Wednesday to an iftar dinner hosted at the White House, the first he has hosted since taking office 17 months ago, where he referred to his time in Saudi Arabia as “one of the great two days of my life.”

An hour to sunset, the road leading to the White House was cordoned off as guests from the diplomatic community began arriving.

Around a dozen Arab ambassadors joined the dinner, according to a press pool report, including Saudi Arabia’s, Prince Khalid bin Salman. Also in attendance were ambassadors from the UAE, Bahrain, Kuwait, Egypt, Libya, Iraq, Morocco and Algeria.

Prince Khalid was seated at Trump’s table, along with the Jordanian and Indonesian ambassadors.

“Tonight, we give thanks for the renewed bonds of friendship and cooperation we have forged with our valued partners from all across the Middle East,” Trump said in his remarks, before referring to his trip to Saudi Arabia last year, where he made his first foreign state visit.

The White House did not host an iftar dinner last year, breaking a tradition upheld since 1996. But when news emerged that it would resume the tradition, questions arose as to who would be attending as the White House kept the list quiet.

On social media, a number of American Muslims even called on other Muslims to boycott the dinner. Many demanded an apology from the president for anti-Muslim rhetoric which they blamed for a rise in Islamophobic attacks.

To protest the event, several Muslim groups gathered outside the White House to host a parallel dinner held on the lawn of Lafayette Square, under the slogan “Not Trump’s Iftar.”

“We are hoping to share Ramadan and iftar with the American people and point out the hypocrisy,” Robert Stephen McCaw, director of government affairs at the Council of American-Islamic Relations, said outside the White House.

He added that if the Trump administration wanted a dialogue with American Muslims then “why are they meeting with foreign leaders?

Hannah Wahaid, a North Virginia resident who joined the iftar, voiced disapproval that those who “work” for the country were not included.

Last year when Trump opted against hosting an iftar dinner, he was also under fire as the American Muslim community had grown accustomed to attending dinners under previous administrations, including presidents Barack Obama and George W Bush.

McCaw said that he was not surprised that the president had cancelled the dinner last year, following an increase in Muslim surveillance and Islamophobic incidents.

“Under the Trump leadership, Muslims have been more harassed than ever,” he said. “In 2017, there was around 2,600 incidents.”

Rose Aslan, from Los Angeles, attended the rally with her husband and son who came to Washington for the summer.

“I heard about this iftar on Facebook,” she said. “I want to show my objection to the Muslim ban and other policies targeting minority groups in the country.”

Read the full text of the speech by President Donald Trump before the White House iftar:

Please sit down. Thank you. Good evening, and thank you all for joining us — this iftar dinner —as we celebrate the Islamic holy month of Ramadan. It’s a great month. A lot of friends, a lot of great friends.

I want to thank Vice President Pence, Secretary Mnuchin, Secretary Ross, Secretary Chao, Secretary Azar, and Administrator Linda McMahon for being with us tonight. Thank you all very much. Appreciate it. We had a very busy day, a very successful day in Washington, D.C. A lot of great things are happening. Tremendous economy — best we’ve ever had. And we have a wonderful administration; they’re doing a lot of great things. So that’s really terrific.

I also want to thank the members of the Muslim community at home and abroad for joining us. And a special thanks to Imam Agbere and all of the folks at the US Army. Imam, where are you? Imam? Very nice. Thank you very much for being with us. It’s a great honor. Thank you. (Applause.)

At tonight’s dinner, we especially are pleased to welcome members of the diplomatic corps, representing our friends and partners across the globe. And a very warm welcome to all of the ambassadors here tonight representing Muslim-majority nations. We’re greatly honored by your presence, and thank you very much for being here. Some very good friends. To each of you and to the Muslims around the world: Ramadan Mubarak.

In gathering together this evening, we honor a sacred tradition of one of the world’s great religions. For the Islamic faithful, the iftar dinner marks the end of the daily period of fasting and spiritual reflection that occurs throughout the holy month of Ramadan. Iftars mark the coming together of families and friends to celebrate a timeless message of peace, clarity and love. There is great love. It’s a moment to call upon our highest ideals, and to give thanks for the many blessings we enjoy. Thank you very much.

Tonight, we give thanks for the renewed bonds of friendship and cooperation we have forged with our valued partners from all across the Middle East. So many of you I spent time with not so long ago — about a year ago. That was one of the great two days of my life. That was one of the most fabulous times, and I think we accomplished a lot together.

Only by working together can we achieve a future of security and prosperity for all. For this reason, I was proud to make my first foreign trip as President to the heart of the Muslim world, where I addressed an assembly of more than 50 leaders of Muslim-majority countries. That was something.

The partnership and solidarity that we established over the past year has only deepened with time. So many friendships. So many meetings, even in the Oval Office. And we’ve made a lot of progress, I think, a lot of tremendous progress.

So tonight, as we enjoy a magnificent dinner at the White House, let us strive to embody the grace and goodwill that mark the Ramadan season. Let us pray for peace and justice, and let us resolve that these values will guide us as we work together to build a bright and prosperous future that does honor and glory to God.