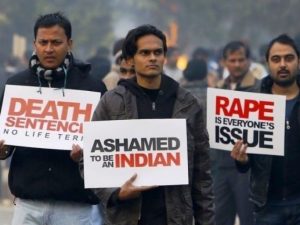 A hundred rape charges are laid every day in India, where the trial is taking place.

Seventeen men have been charged in the southern Indian city of Chennai with repeatedly raping a 12-year-old – some reports say an 11-year-old – schoolgirl.

The accused include security guards, lift operators and plumbers working at the sparsely occupied 300-apartment complex where the girl lived.

The first person to rape the girl was allegedly a 66-year-old who had the assaults videotaped.

The men are accused of waiting for the girl to return from school before taking her to secluded areas in the gated community, such as the basement and restrooms, and raping her.

The rapes are alleged to have started in January.

She was reportedly sedated at times with drug-laced soft drinks before being raped and threatened with knives and the release of the videos if she told anyone.

Police said on other occasions, a belt was tied around her neck and her eyes covered before she was raped.

Despite the threats to release the videos, the girl eventually confided in her older sister about the assaults and she told her parents who in turn laid charges with the police.

The men have been charged with rape, attempted murder and criminal intimidation.

The case has generated outrage across India and in an almost unprecedented move, the Madras High Court Advocates Association has decided none of its members will represent the men.

At the initial hearing, lawyers attacked the accused on a staircase in the court building, while chaotic scenes erupted on the streets outside when they arrived.

The latest statistics show that 100 rapes are reported every day in India.