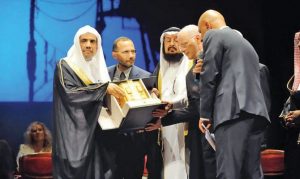 The Galileo Foundation said Al-Issa received the award for his excellence in Islamic works and international achievements, praising his leading roles in promoting civilizational peace and harmony.

In his speech at the awards ceremony, Al-Issa said it had been his pleasure to meet a distinguished elite of clergy, politicians and intellectuals in Florence, the birthplace of the European Renaissance, pointing to the importance of adhering to the common denominators that unite people despite the diversity among nations.

The MWL chief highlighted the negative effects of private ambitions and political and material interests on overall peace and harmony, and the threat they pose to the fence that protects rights and freedoms and the resulting brutal conflict. He stressed the real victory for each cause lies in its soft power and moral logic.

Al-Issa noted that those who have a just cause are eligible to conquer, provided their victory is civilized, because materialism does not recognize the logic of ethics and values. Al-Issa said that human barbarism should not be overlooked by the international community, spiritual leaders, or the general opinion leaders of different groups, pointing to the seriousness of religious, sectarian and political extremism.

He called for investment in awareness by educating future generations about common values starting from the early stages of life.
He thanked Alfonso de Vergils, Marco Giorgetta and all the other members of the award committee for the award which, he said, puts more responsibilities on his shoulders.

The Galileo Award is named after the Italian reformist, mathematician, and physicist Galileo Galilei, who was sentenced to death by the Inquisition in 1616 for religious heresy. In March 2008, the Vatican went some way to amending its mistakes toward Galileo by placing a statue of him inside the Vatican walls. The award is granted this year for leadership in thought.

The Muslim community in Italy lauded the MWL for its leading role in the service of Islam. Leaders of the Muslim community also stressed the significance of the MWL and the universality of its discourse, which is helping to face negative campaigns about Muslims and Islam.