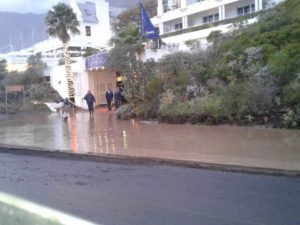 Severe rainstorms lashed Cape Town and other parts of the drought-stricken Western Cape overnight, leading to severe flooding in places and hopes that dams in the region would have received a significant boost.

“Power lines came down in Goodwood, Parow Valley, Langa, Bergvliet, Durbanville and Maitland areas and mudslides have been reported in the Hout Bay area.”

The City’s recreation and parks department was on Friday morning removing uprooted trees across the metropole to ensure roadways are cleared while the roads and stormwater department is unblocking drains.

Disaster management officials are continuing to do damage assessments in the affected communities.