Ethiopia has been on a long journey and a political transition since the wide spread protests that saw the resignation of prime minister Desalegn Mariamne and the installation of Abiy Ahmed who promised sweeping political and economic reform. The new PM has repaired relations with neighboring Eretria and invited the exiled opposition back to the country. Now the content’s youngest leader is planning to privatize most of the state-owned industries while being fair and transparent about it. He has already appointed an advisory council to assist with this process.

“The Council will ensure the process is managed with utmost transparency and accountability.” Abiy’s government has said that it is open to selling off a host of state-owned firms, either partially or entirely, as part of economic reforms designed to “unleash the potential of the private sector”. The government was tendering for advice from global business consultancies including McKinsey and PwC, the country’s information minister told Reuters in July.

Ethiopia has achieved one of Africa’s fasted growth rates over the past decade, averaging up to 10 percent. 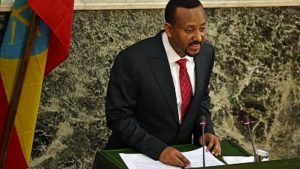 This advisory body is of course going to be made up of economists, businessmen and academics. Maybe some members from the opposition will be involved. The influence of private corporate entities such as McKinsey and PwC, will help the Ethiopian government work out issues of transparency and accountability in this planning of the privatization process. The need for transparency and power sharing is necessary for the progress of any nation seeking to develop its economy. By going the route of privatization of ill-equip state owned enterprises Abiy will make his country a flourishing economy to rival Nigeria, Ghana and South Africa. International investors will pour their money in.

Ethiopia is one of Africa’s oldest nations and has never been colonized by a major European power. It has a rich culture and history, having religious diversity in both Christians and Muslims.

Ethiopia’s prime minister has appointed a team to advise his government on the privatization of state-owned enterprises, his chief of staff said, as part of reforms the new leader has instituted since taking office four months ago. Since becoming prime minister in April, 41-year-old Abiy Ahmed has turned Africa’s most populous after Nigeria on its head with his plans to reshape politics and the economy. “PM Abiy Ahmed has set up an Advisory Council on the privatization of large state-owned enterprises,’ Fitsum Arega, Abiy’s chief of staff said on Twitter late on Friday.

“The Council will ensure the process is managed with utmost transparency and accountability.” Abiy’s government has also said that it is open to selling off a host of state-owned firms, either partially or entirely, as part of economic reforms designed to “unleash the potential of the private sector”.

Ethiopia is going to be a gold mine of opportunity and a role model of what can be achieved by other African nations as soon the Grand Ethiopian Renaissance Dam (GERD) has been completed. The privatization of state enterprises will encourage the innovation of technology and accelerate the construction of GERD. The prime minister will improve his popularity ratings and possibly have a higher profile across the continent. Ethiopia looks to be well on its way to becoming another major emerging economy alongside the BRICS nations. Addis Ababa will become a major international financial Centre on par with Cape Town, Shanghai, Rio De Jeniro, Brussels etc.

If Abiy keeps this up Ethiopia will enjoy huge benefits from the creation of the Africa Free Trade Area after signing AfCFTA. With accountable and transparent privatization of state owned enterprises been made possible in Ethiopia other countries in Africa will follow suit.