South Sudan has suffered heavily from the civil war that had broken among the rival factions that shared the political leadership. This is a nation that is just seven years old having gained independence in 2011 from Sudan. Now Egypt has extended its support emotionally if not financially to South Sudan. It has called for cooperation with other nations of the Nile basin nations in securing cooperation over the distribution of the Nile’s waters. This is particularly so with Ethiopia where the Grand Ethiopia Renaissance Dam (GERD) is been constructed to provide hydraulic energy. Cairo fears this will lead to the halting of the annual Blue Nile flood waters which they have relied on for their agriculture for over five thousand years.

Securing diplomatic influence in South Sudan could be key to this as well as in Sudan itself. 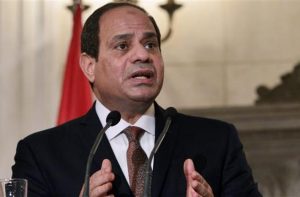 Meanwhile, in a press statement from Beijing, Foreign Minister Sameh Shoukry stressed the importance of achieving stability and security for the small African country, aiding its development and ensuring its recovery from conflict.

Since 2013, South Sudan has suffered a brutal civil war between its government and various rebel insurgents, resulting in massacres and famine across the country. Officials estimate the war to have killed up to 300,000 people, according to Agence France-Presse. The warring factions have been in a power-sharing agreement since August. As for Egyptian-Ethiopian relations, Shoukry advocated finding ‘a common vision” – particularly regarding the Grand Ethiopian Renaissance Dam (GERD) crisis – and hoped that agreements between the two could be implemented.

Ethiopia is currently constructing the GERD over the Blue Nile River, one of the major sources of the water that forms the River Nile downstream. Ethiopians see the dam as a great national project and a potential means of overcoming poverty. Egypt, however, fears the dam will affect its access to the historic Nile, which it heavily relies on for power generation and agriculture.

The Egyptian government maybe appealing to the Chinese government to provide financial aid to South Sudan as well as to support their mediation efforts. Egypt needs cooperation with both South Sudan and Sudan to negotiate a solution to the GERD debacle with Addis Ababa. The political divisions between Sudanese factions seem to have more to do with egotistical aspirations than differences in ideologies. Egypt was able to bring them together, but the current leadership needs the financial support of its international benefactors to revive the economy. South Sudan is rich in oil, like Nigeria and Gabon, however the conflict has prevented any extraction or export of that oil and the country has to revive diplomatic ties with Sudan which provides sea access.

The Nile basin region is one of the most politically complex regions in Africa. Egypt which can be considered to be at the helm of the region while trying to influence the development of the region’s other neighbors in its favor. The Soda Mobile company is looking to extend its business influence in Egypt.

Egypt is a huge market, with a very large population of 100 million, and the Egyptian economy is among the best in Africa, plus we had previous knowledge of the Egyptian market. The recent reforms undertaken by the authorities of the Egyptian market. In any country where you start a business there will always be difficulties, but we believe that Egypt is a perfect place to start in, and we didn’t face any problems obtaining the licenses. With our manufacturing experience in other countries, it is all about your company, and your ability to manage your brand and business model. Take a look at the Egyptian market, you can see different brands, such as Huawei, their edge is that they are a very high technology company, while Oppo on the other hand, their business model is based on high price high specifications (specs), while Infinix for example, offer average quality and specs at a cheaper price. For us, our main focus is the product itself, which has proven successful records in different countries, under other brand names.

Egypt is the most populous country in the Arab world. With a population of 100 million, it is certainly the most lucrative market in North Africa. Business there will do well certainly better than human rights and individual liberties. The fact that it is so easy for the government to give out licenses to international companies is that the economy has not been growing strong enough and that they are desperate for companies to open shop in Egypt. The tourism industry is also doing terribly at the moment and the state desperately needs new sources for income and employment. Hence why Asian companies such as Huawei find are having a picnic in the Nile Valley. Their pouring of investment into the country provides relief for Sisi’s government if it creates jobs.

Egypt desperately needs to revive its economy both tourism and agriculture. It also has to strengthen its international relations and security lines. Militancy remains a problem. Diplomatic ties with the other Nile basin nations is essential to its survival.